The Mighty Thor, or just Thor for short, is an American comic book series by Marvel Comics that centers on the titular superhero, Thor, the Asgardian god of thunder. Debuting in the Silver Age of Comic Books, the character first appeared in Journey into Mystery #83 (Aug. 1962) and was created by Stan Lee, Larry Lieber and Jack Kirby.

He has starred in several ongoing series and limited series, and is a founding member of the superhero team the Avengers, appearing in each volume of that series. The character has also appeared in associated Marvel merchandise including animated television series, clothing, toys, trading cards, video games, and movies. 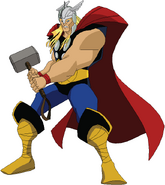