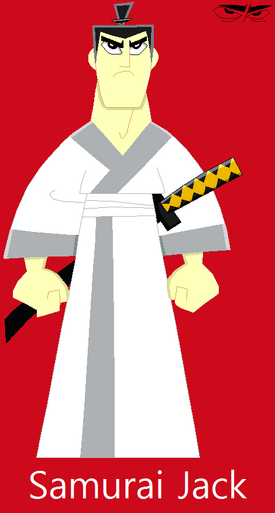 The son of the Feudal Japanese Emperor. His real name is never stated. The name "Jack" comes from the reaction of alien inhabitants of future Earth who saw him in action. He was inspired to become a samurai when as a child he saw a samurai defend his young son against bandits. When the recently released Aku attacked, he was evacuated as part of a prearranged plan by his parents.

His training is extensive, if anachronistic. On the evacuation ship, he learned navigation by the stars. In Arabia, horsemanship, stick fighting in Africa, literacy among the pyramids of Ancient Egypt, wrestling in Ancient Greece, archery from Robin Hood, seamanship from the Vikings, axe throwing in Czarist Russia, and kung-fu in the legendary Shaolin temple. It is later revealed he also has the skills of the ninja, and he learned the skill of high jumping from a tribe of anthopoid apes.

He is reunited with his mother in a Tibetan monestary. There he receives his father's magic sword. His people, including his father have been enslaved by Aku, so he goes to fight Aku. As Jack is about to defeat the evil being, Aku sends Jack into the future where Aku rules the world. Jack quests to defeat Aku and return to his own time, fighting Aku's robotic, alien and supernatural minions, as well as others who are not connected with Aku. His personal honor often gets in the way of his returning to his own time.

Want to know more about Samurai Jack? Visit the website below.