Futurama is an American adult animated science fiction sitcom created by Matt Groening, and developed by Groening and David X. Cohen for the Fox Broadcasting Company. The series follows the adventures of a late-20th-century New York City pizza delivery boy, Philip J. Fry, who, after being unwittingly cryogenically frozen for one thousand years, finds employment at Planet Express, an interplanetary delivery company in the retro-futuristic 31st century. The series was envisioned by Groening in the late 1990s while working on The Simpsons, later bringing Cohen aboard to develop storylines and characters to pitch the show to Fox.

In the United States, the series aired on Fox from March 28, 1999, to August 10, 2003, before ceasing production. Futurama was then aired in reruns on Cartoon Network's [adult swim] block from 2003 to 2007, until the network's contract expired. It was revived in 2008 as four direct-to-video films; the last of which was released in early 2009. Comedy Central entered into an agreement with 20th Century Fox Television to syndicate the existing episodes and air the films as 16 new, half-hour episodes, constituting a fifth season.

In June 2009, producing studio 20th Century Fox announced that Comedy Central had picked up the show for 26 new half-hour episodes, which began airing in 2010 and 2011. The show was renewed for a seventh season, with the first half airing in June 2012 and the second set for early summer 2013. It was later revealed that the seventh season would be the final season, as Comedy Central announced that they would not be commissioning any further episodes. The series finale aired on September 4, 2013.

Throughout its run, Futurama has received critical acclaim. The show has been nominated for 17 Annie Awards and 12 Emmy Awards, winning seven of the former and six of the latter. It has also been nominated four times for a Writers Guild of America Award, winning two for the episodes "Godfellas" and "The Prisoner of Benda", been nominated for a Nebula Award and has received Environmental Media Awards for episodes "The Problem with Popplers" and "The Futurama Holiday Spectacular". Futurama-related merchandise has also been released, including a tie-in comic book series and video game, calendars, clothes, and figurines. 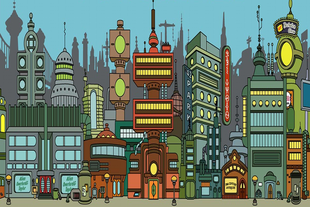 Want to know more about Futurama? Visit the website below.