Dinosaur is a 2000 American CGI adventure film produced by Walt Disney Feature Animation and The Secret Lab and released by Walt Disney Pictures. It follows an orphaned Iguanodon who, as a friend of the lemurs, after surviving a devastating meteor, are moving out for their new home. Along the way, they befriend and reunite the remaining herd of dinosaurs who are being pursued by predators, such as the Carnotaurus, while on a journey to the "Nesting Grounds".

While the characters in Dinosaur are computer-animated, most of the film's backgrounds are live-action and were filmed on location. A number of backgrounds were found in Canaima National Park in Venezuela; various tepuis and Angel Falls also appear in the film. It is the second film (after Fantasia 2000) produced by Walt Disney Feature Animation to feature computer-generated three-dimensional animation. At officially $127.5 million, it was the most expensive theatrical film release of the year. The film was a financial success, grossing over $349 million worldwide in total box office revenue, becoming the fifth highest-grossing film of 2000. 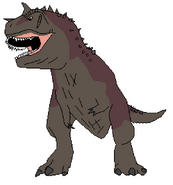 Want to know about Disney's Dinosaur? Visit the website below.