Cheetos is a brand of cheese-flavored, puffed cornmeal snacks made by Frito-Lay, a subsidiary of PepsiCo., and was first introduced in 1948. Chester Cheetah, the mascot of the snack brand, debuted in 1983, and has appeared in a number of Cheetos commercials in the following years. The character also stared in two video games for the SNES and SEGA Genesis. 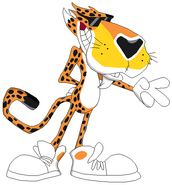 Want to know more about Cheetos? Visit the website below.