Casper the Friendly Ghost, or just Casper for short, is an American cartoon/comic media series that centers on the titular character, Casper. In the series, the character is depicted as good ghost, who prefers to help people rather than scare them.

Casper was created in the late 1930s by Seymour Reit and Joe Oriolo, the former devising the idea for the character and the latter providing illustrations. Intended initially as the basis for a 1939 children's storybook, there was at first little interest in their idea. When Reit was away on military service during the Second World War before the book was released, Oriolo sold the rights to the book to Paramount Pictures' Famous Studios animation division.

Casper went on to become one of the most famous properties from Famous Studios. Casper was first published in comics form in 1949 by St. John Publications; Alfred Harvey, founder and publisher of Harvey Comics began producing Casper comic books in 1952, and in 1959, Harvey purchased the rights to the character outright. 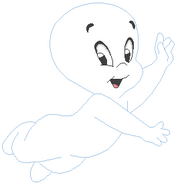