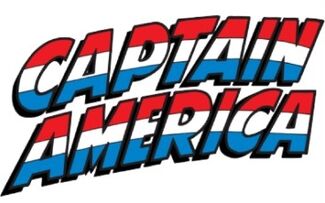 Captain America is an American comic book series by Marvel Comics that centers on the titular superhero. Created by Joe Simon and Jack Kirby, the character first appeared in Captain America Comics #1 (cover dated March 1941) from Timely Comics, a predecessor of Marvel Comics.

Captain America was designed as a patriotic supersoldier who often fought the Axis powers of World War II and was Timely Comics' most popular character during the wartime period. The popularity of superheroes waned following the war and the Captain America comic book was discontinued in 1950, with a short-lived revival in 1953. Since Marvel Comics revived the character in 1964, Captain America has remained in publication.

Captain America wears a costume that bears an American flag motif, and is armed with a nearly indestructible shield that he throws at foes. The character is usually depicted as the alter ego of Steve Rogers, a frail young man enhanced to the peak of human perfection by an experimental serum to aid the United States government's imminent efforts in World War II. Near the end of the war, he was trapped in ice and survived in suspended animation until he was revived in the present day to subsequently become the long-time leader of the Avengers.

Captain America was the first Marvel Comics character to have appeared in media outside comics with the release of the 1944 movie serial, Captain America. Since then, the character has been featured in other films and television series, more recently in the Marvel Cinematic Universe portrayed by Chris Evans. 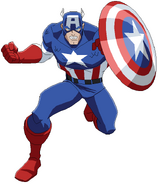